Sealed With a Kiss: Newlyweds Harry and Meghan Process Through Windsor

WINDSOR, England: Prince Harry and his actress bride Meghan Markle married on Saturday (May 19) in a dazzling ceremony that blended ancient English ritual with African American culture, infusing the 1,000-year-old British monarchy with a blast of modernity. 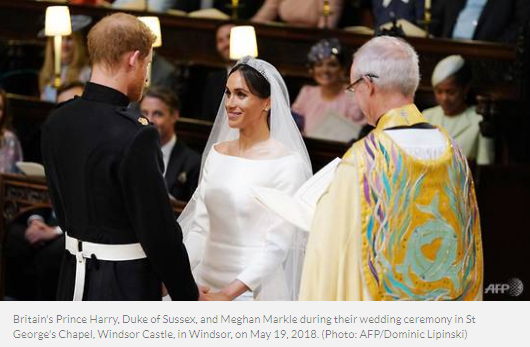 In a medieval chapel at Windsor Castle that 39 English kings and queens have called home since 1066, Harry and Meghan exchanged vows watched up close by royals and celebrities, and from afar by a global TV audience of many millions.

Wearing a veil, diamond tiara and a sleek dress with a long train, the American actress was accompanied up the aisle of St George's Chapel by Harry's father, Prince Charles, before she and Harry exchanged vows and were proclaimed husband and wife.

The couple kissed on the steps of the 15th Century chapel, before delighting the sea of well-wishers, some of whom had camped for days to witness the spectacular show of British pomp and pageantry, by touring Windsor in a horse-drawn carriage.

The union of Harry, 33, a former royal wild child and sixth-in-line to the British throne, and 36-year-old Meghan, a divorcee whose mother is African-American and father is white, was like no other the royal family has seen before.

"We can break the barriers down, it can be done," said 40-year-old black Briton Yvonne Emanuel, one of the 100,000-strong crowd that thronged Windsor's streets.

The ceremony was typical of royal weddings in many ways. The service was conducted by the Dean of Windsor while Justin Welby, the Archbishop of Canterbury, declared the couple man and wife, beneath the banners of the knights of the Order of the Garter, the world's oldest chivalric group dating back to 1348. 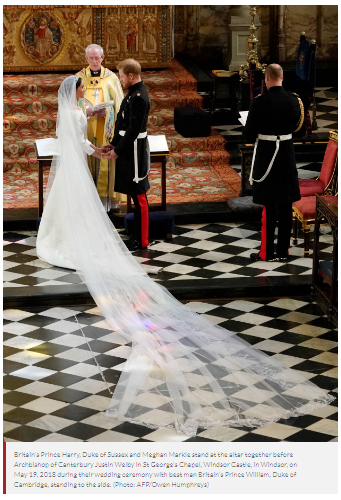 Britain's Prince Harry, Duke of Sussex and Meghan Markle stand at the altar together before Archbishop of Canterbury Justin Welby in St George's Chapel, Windsor Castle, in Windsor, on May 19, 2018 during their wedding ceremony with best man Britain's Prince William, Duke of Cambridge, standing to the side. (Photo: AFP/Owen Humphreys)

The newlyweds will also be officially known as the Duke and Duchess of Sussex after Queen Elizabeth bestowed those titles on them.

But throughout the wedding, there were significant breaks with tradition, in particular when US Episcopalian bishop Michael Bruce Curry delivered a passionate sermon that was a far cry from the sober tones of the Church of England.

"Do not underestimate it. Anyone who has ever fallen in love knows what I mean," Curry told the congregation in an energetic, passionate address that quoted US civil rights campaigner Martin Luther King.

African-American Karen Long, who was among the crowds in Windsor listening as the ceremony was relayed on loudspeakers, was one of those who appreciated the bishop's fiery address.

"It was a moment for African-Americans," said Long, who had come from Houston, Texas, with her sister and a group of friends, all dressed as bridesmaids. "The idea that Harry allowed that and acknowledged it, it was the perfect blend between her culture and the royal culture."

Meghan's mother, Doria Ragland, 61, accompanied her daughter to the chapel in a vintage Rolls Royce and shed tears of emotion at several points during the ceremony.

Meghan entered the chapel unescorted, offering TV viewers and the congregation a first good look at her hotly anticipated wedding dress, which was created by British designer Clare Waight Keller of the French fashion house Givenchy.

Harry, looking nervous, appeared to say: "Thanks Pa" to his father, and "You look amazing!" to his beaming bride. 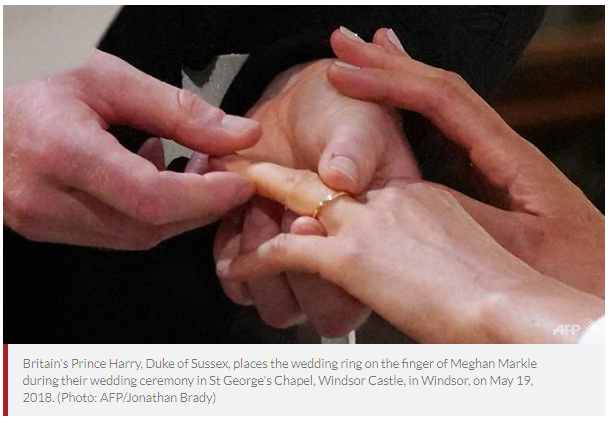 Britain's Prince Harry, Duke of Sussex, places the wedding ring on the finger of Meghan Markle during their wedding ceremony in St George's Chapel, Windsor Castle, in Windsor, on May 19, 2018. (Photo: AFP/Jonathan Brady)
In further breaks with tradition, Markle, 36, did not vow to obey her husband; while Harry, who is three years her junior, wore a wedding ring - unlike other senior male royals such as his older brother Prince William.

Before becoming engaged to Harry, Meghan, who starred in TV legal drama "Suits", had spoken out on a number of feminist causes. 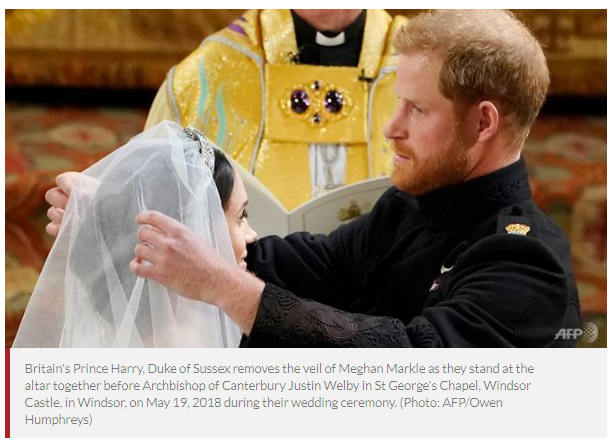 Britain's Prince Harry, Duke of Sussex removes the veil of Meghan Markle as they stand at the altar together before Archbishop of Canterbury Justin Welby in St George's Chapel, Windsor Castle, in Windsor, on May 19, 2018 during their wedding ceremony. (Photo: AFP/Owen Humphreys)


The world's media have been gripped by the occasion, and television channels beamed the ceremony across the world.

To some Britons, the marriage of a senior member of the royal family to the daughter of an African-American mother and white father embodied a modern Britain where race or background are no bar to even the most elite and traditional of institutions.

To others, it was an irrelevance or a mild distraction from the schism of Brexit, which has deeply divided the United Kingdom. Polls suggested that most Britons would not bother tuning in.

But in the narrow streets of Windsor, 20km west of London, the enthusiasm from the vast crowds waving British flags and cheering was overwhelming, while thousands more celebrated at street parties held across the country. 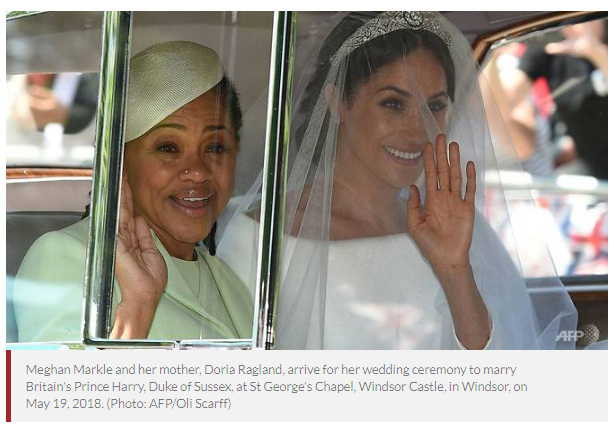 Meghan Markle and her mother, Doria Ragland, arrive for her wedding ceremony to marry Britain's Prince Harry, Duke of Sussex, at St George's Chapel, Windsor Castle, in Windsor, on May 19, 2018. (Photo: AFP/Oli Scarff)

Air traffic controllers for nearby Heathrow Airport, one of the world's busiest, even closed the airspace over the town for the 15 minutes before the ceremony to avoid marring proceedings with the roar of low-flying aircraft. 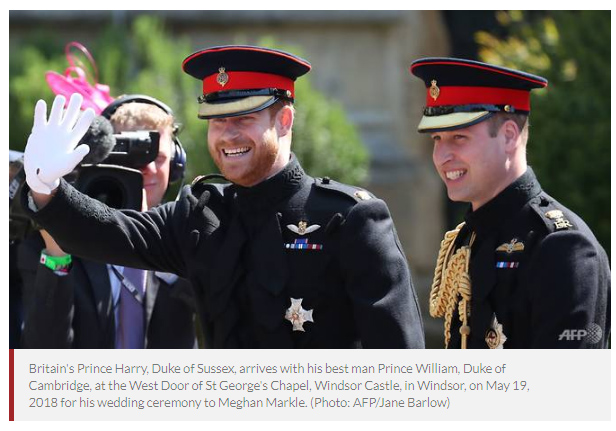 Britain's Prince Harry, Duke of Sussex, arrives with his best man Prince William, Duke of Cambridge, at the West Door of St George's Chapel, Windsor Castle, in Windsor, on May 19, 2018 for his wedding ceremony to Meghan Markle. (Photo: AFP/Jane Barlow)

Her sister, Lady Jane Fellowes, delivered the reading and the chapel itself was garlanded with white roses, the favourite flowers of Diana, who died in a car crash in Paris in 1997. 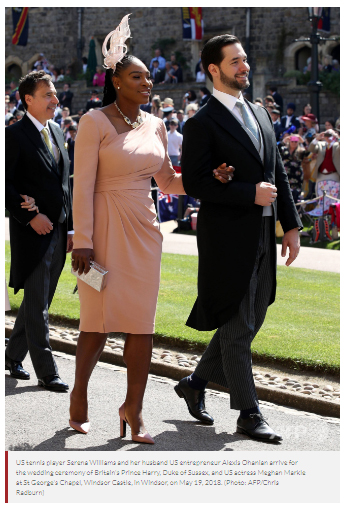 US tennis player Serena Williams and her husband US entrepreneur Alexis Ohanian arrive for the wedding ceremony of Britain's Prince Harry, Duke of Sussex, and US actress Meghan Markle at St George's Chapel, Windsor Castle, in Windsor, on May 19, 2018. (Photo: AFP/Chris Radburn)

Elton John, who sang at Diana's funeral, performed at the Harry and Meghan's wedding reception, held in the castle's St George's Hall. About 200 guests were due to join the couple at an evening event later at the nearby Frogmore House mansion when Markle was due to make a speech to guests. 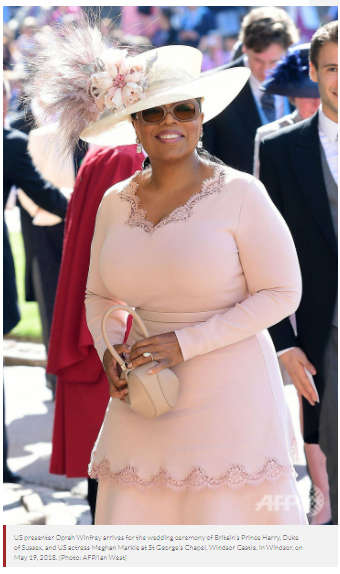 US presenter Oprah Winfrey arrives for the wedding ceremony of Britain's Prince Harry, Duke of Sussex, and US actress Meghan Markle at St George's Chapel, Windsor Castle, in Windsor, on May 19, 2018. (Photo: AFP/Ian West)


The royal couple, who met on a blind date in 2016 and fell in love in a tent under the stars in Botswana, tied the knot in a castle that has been home to 39 English monarchs since 1066.

With security tight, tens of thousands of visitors had to pass through police search points around the castle. 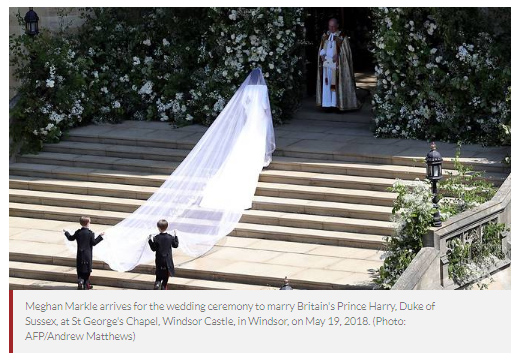 Markle's own father Thomas Markle, 73, a former lighting director for TV soaps and sitcoms, pulled out of the ceremony this week, telling the U.S. celebrity website TMZ he had had heart surgery on Wednesday.

Confusion over his attendance marred the build-up to the wedding, which had been choreographed for months by royal aides, and his name was still present in the order of service.

After watching the ceremony from California, he told TMZ it had been "emotional and joyful":

"My baby looks beautiful and she looks very happy. I wish I were there and I wish them all my love and all happiness."

The service was conducted by the Dean of Windsor with Welby, Archbishop of Canterbury and spiritual head of the Anglican Church, overseeing the exchange of vows.

A reception will be held in the castle's St George's Hall before 200 guests join the couple at an evening event at the nearby Frogmore House mansion.

Harry and Meghan will not immediately leave for a honeymoon and will carry out their first official engagement as husband and wife next week. 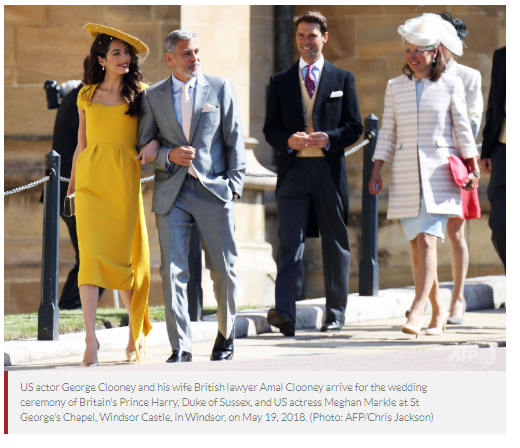 US actor George Clooney and his wife British lawyer Amal Clooney arrive for the wedding ceremony of Britain's Prince Harry, Duke of Sussex, and US actress Meghan Markle at St George's Chapel, Windsor Castle, in Windsor, on May 19, 2018. (Photo: AFP/Chris Jackson)

The British remain broadly supportive of the monarchy, albeit with a sense of mild irony about the pomp and pageantry that accompanies it, though most have deep respect for Queen Elizabeth after her 66 years of service as head of state.

Despite being unlikely to ever ascend to the throne as he is behind his father, brother, two nephews and niece in the line of succession, Harry has been at the forefront of efforts to modernise the monarchy in recent years, rejecting the uptight royal image to talk openly about his innermost feelings. 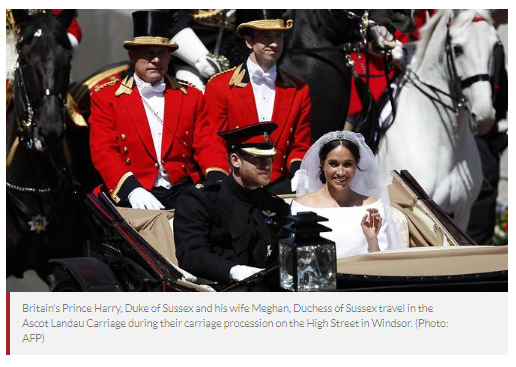